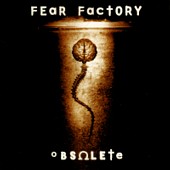 Technology is advancing at an almost ridiculous rate of speed, making last year’s state of the art equipment as ancient as stone tablets.  Many of these advances have been enormously beneficial to mankind (or, perhaps more accurately, to those who can afford it).  On the other hand, these same advances have enabled those who wish to pry into citizens’ private lives, further limit personal freedoms, and promote police-state enforcement of their beliefs to do so more effectively than ever.  Now imagine a future in which technology takes over the role of man and begins thinking for itself, expounding upon and implementing the policies of power-hungry control freaks in a bid to make order universal and man obsolete.  This is the setting for the latest FF release, which has taken the route of the theme album in the spirit of King Diamond or (gulp!) Queensryche (oh God, I must be coming down with something…what the hell’s wrong with me?  It just popped out…a bona-fide Brain Burp).  Fear not, fearless Fear Factory fans (I am getting sick…), it sounds nothing like either of the aforementioned bands/individuals…

I have to admit that, despite the many brilliant moments on their previous metal release, Demanufacture (as opposed to their techno/rave remixes released as Remanufacture, for the benefit of those unfortunate enough to have been deprived of the FF experience thus far…), I was a bit concerned as to the direction these guys might be heading in due to some rather cheesy moments on that album as well as the disturbing trend of previously great metal bands beginning to churn out sheisty mainstream crap.  So I was silently grateful (ok, ecstatic) to find that the FF boys have not forsaken their heaviness and have continued to create some rather innovative material.  Continuing in the spirit of their fascination of man-meets-machine terrorvisions, Obsolete is FF in top form, Terminator-esque plot and all (and really, we all should have seen this one coming…especially with titles like "Securitron (Police State 2000)" and "Smasher/Devourer").  And Burton’s lyrical ability has improved a bit…I only winced once, and it wasn’t the lyric, it was how it was sung (approximately ten seconds of the otherwise strong "Smasher/Devourer") - and we can chalk that up to good ole FF experimentation.

The opening track, "Shock", is the kind of song that has made FF great - heavy, mechanically precise rhythm, Burton’s harsh vocals abruptly but smoothly switching into an eerily clean chorus…it’ll make yer blood pressure skyrocket in anticipation of more - and more you’ll get.  "Edgecrusher" tunes down a bit, taking a cue from Roots-era Sepultura and (choke) Korn (yes, I am officially ill now…oh how I’d love to get a hold of a Korn CD without paying for it so I could do some Korn-bashing).   Despite the demeaning comparison (no offense to the Seps intended, of course, hehe), it’s actually a very solid effort, though a bit different for them…

"Securitron" contains one of the most eerie clean-vocal moments since the ‘New Machine days ("no place to hide….hide….hide…hide…"); all of Burton’s clean work in this track is exceptional, evoking the same emotions as those found in previous gems like "Pisschrist" and "Scumgrief".  One of the most striking experiments on the cd is found in "Descent", in which Burton opts to cut the gravel on his vocals in half (as some may recall, this same tactic was tried on "Replica" with rather weak results) with a much more convincing effect.   "Resurrection" further confirms Fear Factory’s tendency to try what others have not (and again, in this instance, it works nicely) by incorporating chamber strings and a few instances of dual vocal tracks.  Unfortunately, this track veers dangerously close to mainstream territory at times and will probably be dismissed by those who tend not to keep an open mind…

While FF have yet to create a flawless, perfect specimen of a cd, they are well on their way to doing so.  I have been quite content to listen to them develop and come into their own, and this cd is no exception.   I count them among a currently declining number of metal bands that consistently put out high quality stuff with little regard for current trends (although they do make me nervous at times, hehe!).  With all this stuff in mind, this one is definitely worth owning…