So Much for the Afterglow Album reviews.

Home » So Much for the Afterglow

So Much for the Afterglow 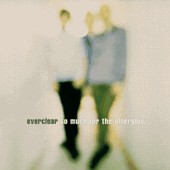 Live Life in a Wonderful Way
by: bill aicher

You ever think that way?   I do, and I am sure a lot of you have as well.  Come on, there is no denying it.  This is real life.  We live it everyday, as does Art Alexakis and Everclear.  Funny how real life can be do so much for a song, isn't it?  For real life is what Art sings about.  The music touches home in many of his listeners, which is the reasoning I have been told by more than a few people that they think Art Alexakis is one of today's best lyricist.

So Much for the Afterglow is Everclear's third CD, their follow-up to the popular Sparkle and Fade (1995).  Their first album, World of Noise was released by an Indie label in 1993.  As with other fine bands, when listening to the albums in order you can notice the growth in all directions with the music and lyrics.  On the new album, the punk style has become less of a centerpoint in the music.  They still use their 3-chord progressions, but have moved on to more instruments than just guitar, bass, and drums.   "Why I Don't Believe in God" features Alexakis on banjo.

As mentioned above, they have grown lyrically as well.  Alexakis in 37 years old, and has lived life.  He knows what it is like to be a teenager.  He knows what it is like to be in your twenties.  He knows what is is like to love, marry, and raise a family.  His lyrics stem from this life.  One of the most popular singles from this album "I Will Buy You a New Life" is a song of perseverance and doing whatever you can do make the best of what you have.  In the intro to this song when I last saw them in concert, Alexakis spoke of knowing what it is like not to have it all.  He was not one of the people who has "never had the joy of a welfare Christmas".   Alexakis worked his ass off to get where he is, and now he can afford "that big house way up in the west hills".  His songs speak of the happiness, sadness, anger, torment, love, and hate that all are part of our lives.  "Why I Don't Believe in God" is a song about the nervous breakdown his mother experienced when Art was eight years old.  The first single "Everything to Everyone" is basically a song about fakers or poseurs - people who try to be whatever other people want.  The latest single "Father of Mine" is a song of the father who was never there.

Overall this is an impressive album.  Fans of Everclear no doubt will be pleased, as will newcomers.   The music is not as punk and intense as in the previous albums (barring a few tracks such as the instrumental - "El Distorto de Melodica").  I love the album, but then again I love Everclear.

"...Smiles at me and tells me everything will be alright".