Home » Songs from an American Movie Vol. 2: Good Time for a Bad Attitude

Songs from an American Movie Vol. 2: Good Time for a Bad Attitude 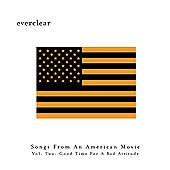 It Finally Makes Sense To Me
by: bill aicher

When Everclear set out to make their soundtrack to the American movie, they decided to make it a two-parter. First came the happy-go-lucky Learning How to Smile featuring such pop goodies as "Wonderful" and "A.M. Radio." Learning How to Smile was the glossed over happiness that everyone sees when they look at everyone else. It was the cheerful times that make our lives worth living.

But Art Alexakis and company are no fools. They know the other side as well, and it comes through in Songs From an American Movie Vol. 2: Good Time for a Bad Attitude. If Vol. 1 was the happy part of life, Vol. 2 is all the extra bullshit that comes along with it. And you have to take both to have a real life, or a real American movie.

The new album leaves the pop rock music that has been rotating around the pop charts behind. This time out Everclear have returned to their basic harder rock / punk roots that made So Much for the Afterglow ("Heroin Girl," "You Make Me Feel Like a Whore") such a success.

The first single, "When It All Goes Wrong Again," starts off the album and is followed by the second single, "Slide." Both rockers in their own right.

"I feel good about the sin / that I inflict on my own skin / I pay money to cut and burn/ Pictures like lessons / That I need to learn," sings Alexakis in "When It All Goes Wrong Again."

The most notable change in this album versus earlier rock works from Everclear is the more optimistic outlook on life. We have all heard how horrible life was for Alexakis, growing up and so on. However, on this album he takes those events and makes them into learning experiences. And he knows that no matter how bad it can get, it can always get better.

If you are stuck making a decision on which album to pick up, Good Time for a Bad Attitude seems like the obvious choice - especially for fans of older Everlear. Still, the best option would be to pick them both up and listen to them straight through.

Sometimes it seems like this would have been better as a double album. But then again they are two separate parts of life, and sometimes in life you don't get the luxury of getting the bad with the good. Sometimes you have to live through one to get to the other. But you get to learn a lot through them both. Together this all makes up the American movie.