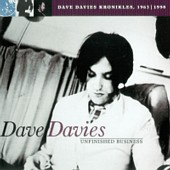 This two disc retrospective of the legendary Kinks' lead guitarist and occasional songwriter - Dave's brother Ray was the primary mouthpiece and composer of the band - is both fascinating and maddening. Imagine, if you will, that we make first contact with an alien species, and they are interested in the music that humans listen to. They would like to hear some of the Beatles as an introduction to the rock genre. So you gather all of the best Beatle tunes written by George Harrison, put them on a mix tape, and inform the alien delegation that you have painstakingly compiled a perfect introduction to the most influential band of the rock era.

Ridiculous, no? But the first disc and the second half of the second disc of Unfinished Business are the Kinks equivalent of that. Equally curious is the almost haphazard song selection. The collection falters by trying to be both a best-of-Dave collection and a diehard fans' treat at once, while not really including enough of either to be one or the other. On the one hand we get "You Really Got Me," "Death of a Clown" and "Living On a Thin Line," the only tracks that will be familiar to any but the most ardent Kinkophiles. But also included are unreleased Dave-penned Kink tunes like 1969's "Climb Your Wall" and 1991's "I've Got Your Number." The era selection of the Kinks tracks is spotty too - seven tracks from 1965 and before, four from after 1985, but very little from either of the Kinks' most creative periods, the anti-psychedelic concept albums of the late '60s, or the top-flight arena rock years, 1977-83. Perhaps there were difficulties in obtaining permission to use certain songs, but the collection suffers as a result by relying on British Invasion filler like "Long Tall Shorty," and uninspired late '80s hard rock like "Rock and Roll Cities."

And there's really no need for new versions of several '60s Kinks singles, which is the only reason why these Kronikles extend to 1998. These songs were meant to be heard in their original form. Fortunately, a few of them are; "You Really Got Me" still sounds ahead of its time, even after 35 years. In the liner notes we learn that Davies came across the classic fuzz-box guitar sound which propelled early Kinks hits such as this one by hooking up three cheap amps to each other, slashing the speaker cones with a razor blade, and cranking the volume to 11. it's no wonder that the Kinks' back catalogue was rediscovered in the midst of the late '70s punk revival. Unfinished Business is saved somewhat by the inclusion of several tunes from Dave Davies' long out of print early '80s solo albums, "AFL1-3603" and "Glamour." The Kinks at this time were experiencing perhaps the most massive artistic and commercial revival that any of the original '60s British Invasion bands (other than the Rolling Stones) have had since then. Not a money-starved, get-the-lads-back-together-and-sell-some-T-shirts reunion tour, mind you. The hard rock the Kinks were doing in this era such as the anti-carol "Father Christmas," the working class anthem "Low Budget," and even the mega-hits "Come Dancing" and "Don't Forget to Dance," was vital, focused and incisive. And it didn't get the least bit watered down in Dave Davies' solo projects. "Imaginations Real," from 1980, lest we forget, was a top twenty hit, and a great one at that - a bouncy midtempo song influenced by artsy new wave such as Roxy Music or the Talking Heads. The hard-driving "World is Changing Hands" should have been a hit too with its relentless beat and sing-along chorus. Nine songs from these two albums are included, and each one drifts by and sucks you in with its own unique mood; the screaming pleas of "Nothing More to Lose," the witty wordplay of Unfinished Business, the exotic beauty of "Eastern Eyes." it's pretty incredible how undated it all sounds - only "World of Our Own" with its whiny synthesizers is unmistakably 1981, but it's such a good song it hardly matters.

Dave Davies has written some magnificent songs, many of which appear here, but this cannot be viewed as a comprehensive Kinks retrospective, or even a comprehensive Dave Davies one. It probably would have been best to reissue these solo gems on their own rather then stick them in the middle of a second-best-of-the-Kinks attempt. But at least "Unfinished Business" does bring up an issue that needs to be addressed - why haven't the Kinks received the multi-disc box set treatment yet that they so richly deserve? Until they do, listeners of this Dave Davies primer who want to hear more should go out and invest in the "Kink Kronikles," which covers 1964-71, and "Come Dancing with the Kinks," which covers 1977-86. Both of these are double albums which do far more justice to this often-overlooked classic rock band than any Dave Davies collection ever could.