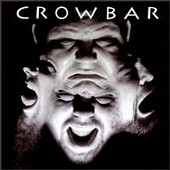 For those who may be unfamiliar with Crowbar, I feel compelled to run through a little history here. Crowbar first formed in New Orleans in 1989 under the name The Slugs. At a time when thrash metal was at its peak with death metal fast on its heels in becoming the most dominant trend in underground metal, a time when speed was essential for heavy music, The Slugs emerged in the N.O. underground pounding out slow, bonecrushingly heavy tunes that few knew what to think of. A demo was made in 1990 which captured their essence in a way most cd's fail to do (note: I will pay handsomely for a new copy of this, as I have worn mine out badly!). By late '91, after an obvious name change and hundreds of unbelievably heavy shows opening for the likes of Exhorder, they were signed to the now-defunct Grindcore label, releasing Obedience Thru Suffering in mid-1992. An exercise in grinding misery and heaviness the likes of which had never been heard before, much of it consisted of songs previously available on the demo, and it didn't garner too much attention outside the local scene here.

In late '93, Crowbar released a self titled cd which quickly became acclaimed throughout the metal scene. Produced by Phil Anselmo of Pantera on the newly formed Pavement label, its production far surpassed that of Obedience, and some unthinkingly passed off Crowbar's sound as a product of Phil and Pantera (this type of thinking is akin to one who deprives himself of the wonderful experience of listening to Faith No More in the ignorant belief that they are Red Hot Chili Pepper clones). Soon even Beavis and Butthead could not resist poking fun at the big boys on more than one occasion, but nor could they deny the heaviness...

Five years and three exceptional cd's later, with numerous personell changes, Crowbar is, happily, still around. And the new cd has (finally) been released. With the recent addition of Sammy Duet (ex-Acid Bath) as the second guitarist, Crowbar has retained their overwhelming propensity for creating the heaviest music this side of any Iron Man weightlifting competition, and yet they have managed to throw in some influences and emotions which were not present in any great degree on previous efforts, making this their strongest release to date. The opening track, "Planets Collide", while a rather odd note to begin the cd with, sets the stage for the rest of it, and while most strikingly different from the rest of this effort, it displays the most amazing mutation of influences Crowbar has yet incorporated. Similar innovations occur in the form of melodic dual vocal tracks (!) in "Scattered Pieces Lay" and "Behind The Black Horizon" (a track which also displays a heaviness and mood not in evidence since Obedience Thru Suffering ; a welcome nod to their roots, this feeling seems to permeate the entire cd in the same manner that a good marinate flavors a steak...). Crowbar's involvement with Down shines through for the first time on "New Man Born", giving the track an oppressive southern-fried edge in the same spirit of Down's "Bury Me In Smoke" or "Lifer", albeit much heavier. This southern influence extends to the most unexpected track on the cd, "Odd Fellows Rest", which can only be compared to Black Sabbath's "Planet Caravan" or Down's "Jail". Though this track might have been more suited for the next Down cd (hmm, wouldn't that be cool!), it is just as powerful in its serenity as the other tracks are in their heaviness...

Were in not for Crowbar's habit of consistently putting out the some of the best heavy music to be had, I would brand this cd a classic for the 90's, just as Metallica's (R.I.P.) Master Of Puppets and Slayer's Reign In Blood were for the 80's. If nothing else, this cd represents a healthy step forward for the band, and is a must-have for anyone who loves oppressively heavy music. So quit reading this and go get it. Now.