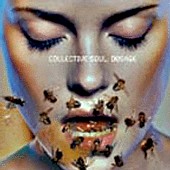 Surviving a Breakdown
by: bill aicher

After the sub-par sales of Disciplined Breakdown, many people were not so sure if they wanted Collective Soul to come back. Their last album did poorly in the charts compared to their sophomore, self-titled, album. Most people still think of "Shine" or "December" when they think of Collective Soul. This may finally come to change with the band from Georgia's fourth album, Dosage.

With Dosage we get one of Collective Soul's most innovative albums yet. The variations in musical style most closely matches what was done on 1995's Collective Soul. Tunes on this new disc are more R&B influenced than on Disciplined Breakdown and Hints, Allegations, and Things Left Unsaid. What we get here is rock that you can groove to, not losing the rock that crunches, including the emotionality that Collective Soul puts into each of their songs.

They brought themselves back to the forefront of pop culture with their first single "Run" which was featured on the Varsity Blues soundtrack. This smooth pop/rock ballad brought in the people who loved "December" and "The World I Know" (both from Collective Soul). However, their second single "Heavy" is just that - heavy. Ed Roland and company covered the entirity of their musical skills with this album. Songs like "Needs" mesh acoustic guitars, percussion, strings, and Ed's vocals into a tightly knit piece of art. Others explore alternate ground, leadign to a mix of rock, pop, R&B grooves, and more.

Lyrically, this album has not shown much progression in the way of subject. We still have songs about love, despair, loneliness; your basic pop/rock song. The difference is in the details. Roland's wording sets this band apart from other bands. With lines like "Mornings like this / Make me feel like I never could float / Glimpses of peace / Portray all that you never could show" ("Slow") we are reminded of what can truly make the difference in a song - the words. What makes the difference for this band, to set it apart from the others who can't make it, is the sum total of the lyrics, musical stylings, grooved beats, and the overall vibe they produce.

Anyone who has liked anything by Collective Soul will not be disappointed by this disc. It surpasses everything they have put out thus far, including Collective Soul. If your love for the group comes from Ed's voice alone, you may want to skip "Dandy Life," but I wouldn't suggest it. (Lead guitarist Ross Childress fronts vocals on this track, showing that Ed does not carry the band). If you are just being turned on to Collective Soul, this would be a great album to start with. Hopefully there is more to come.