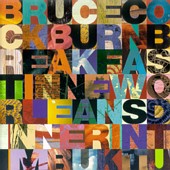 A world in which Paul Simon can draw a Woodstock-sized crowd to Central Park, and in which an equally thoughtful and far more prolific musician like Mr. Cockburn can visit said Park later that summer only to attract fewer passers by than the neighboring zoo, is a sad world indeed. But at least Bruce Cockburn has enough listeners that there's always been a record label sensible enough to keep him on board and let him do his thing. "Breakfast" is yet another gripping collection of songs, equally accessible both to long time fans and new converts.

Long time fans, however, may take a while to warm up to this one. With one or two exceptions, Bruce Cockburn has always been more of a songwriter than an album-writer, preferring to forego the concept of a concept album and to let the songs speak for themselves. But he has always been able to create if not a concept, at least a pervasive mood throughout his recordings, which he doesn't really do here.

The spoken blues that grace much of his '90s work, 1997's "Charity of Night" in particular, are here in the form of three frameworks Cockburn has always written in; political introspection ("When You Give it Away"), sentimental philosophizing ("Isn't That What Friend Are For?), and folkish romance ("Look How Far"). The intricate instrumental work is here in the form of a hypnotic hoedown ("Down to the Delta") and a mystical far-east-influenced drone ("Deep Lake"). But what's also here is Cockburn's poppiest song in over a decade - "Last Night of the World" in which he lets a real clunker of a line ("What would I do different / unless it were champagne with you?) escape onto the disc from the notepad upon which it probably should have been crossed out. And let's not forget the cover of Fats Domino's "Blueberry Hill," which is done well and originally but coming from a 'serious' artist is truly from left field.

All these tracks are still good, but the best material this time around is the material that doesn't fit into his signature patterns. "Mango" is a delectable James-Taylor-meets-Jimmy-Buffett tropical concoction. "Let the Bad Air Out" pounds a mesmerizing riff into the ground but stays exciting anyway, much like the 1975 Cockburn classic "Joy Will Find a way." And the sprawling soundscapes of "Use Me While You Can" and "Embers of Eden" are as complex and rewarding as anything he has done in the '90s.

This alternately-political-and-introspective Canadian singer / songwriter / guitar virtuoso has been at it for an entire generation now - 30 years, 24 albums, and still only one hit ("Wondering Where the Lions Are" in 1980) and no respect. Not that nobody at all has noticed - Bruce Cockburn has what one would call a cult following. "Breakfast" is a great way either to join the cult or to stay in it. Less ambitious than "Charity of Night" perhaps, treading water maybe, but treading waters such as these can only bring greater treasures from the deep.