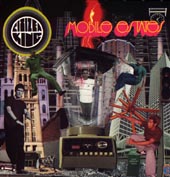 The Best Days
by: bill aicher

Wisconsinites have a new reason to be proud.

Citizen King is that reason. With their first major label release, Mobile Estates, Milwaukee has a reason to rejoice. For years they have been a favorite of the Milwaukee music underground, but have been missing in action for the past two years while they were working on the new album.

March 9 marked their return, and what a return it was.

Think Beck. Think Beastie Boys. Think the soul and attitude that the midwestern Mecca of Milwaukee can only provide. When you toss them all into the blender and hit frappe, you have an idea of Citizen King.

Their funk & hip-hop influenced rock is the perfect menu item in today's monotonous musical world where nothing changes and "Nevermind" is still the base on which all new music is built.

Mobile Estates thrusts Citizen King to the musical forefront. It is a mixture of just about everything that can be found. We have guitars, drums, turntables, keyboards, rap, funk, blues, rock; you name it, they have it.

While their sound may be similar to that of Beck or the Beastie Boys, it isn't rehash.

The base of the music is that of a funk band, with the occasional punk influence. To add a twist to the music, a turntable is used. The heavy sampling and superb scratching add an element of hip-hop to the music. The occasional guitar funk breakdown with a scratch solo is not your everyday mix. The keyboard work includes a multitude of electronic samples and effects that bring the music to today.

"Under the Influence" opens the album. It's upbeat tempo combined with the heavy use of turntablism by Malcolm Michiles propels the album forward from the get-go. The next track is "Better Days" which has been featured on radio stations nationwide, as well as occasional play on MTV. "Safety Pin" is the most rock-inluenced track on the album, featuring a raw guitar sound provided by Kristian Riley. "Billhilly" is a satire on the stereotypes Wisconsinites have to put up with. "He's strummin' on a banjo a lot / square dance hoedown rodeo / and a bucket full of rocks passing the jug . . . "

The rest of the album continues with this mix of hip-hop, rock and funk. It only slows down twice, once at the intermission "The Milky Way," the second at "Closed for the Weekend" - a track about Maritime Days (a Milwaukee lakefront festival where vocalist Matt Sims was arrested for disorderly conduct during their own concert).

Anyone who is familiar with Citizen King's previous albums Count the Days (EP) and Brown Bag LP will be sure to notice the difference between the earlier work and this release. The new music has been highly commercialized, almost every track is radio-friendly.

Matt Sims's voice has undergone changes as well. The original sound he possessed before has been somewhat lost in the mix. In other words, this album has been made to sell. Fans of the Beastie Boys or Beck will definitely be impressed by this album. The turntable skills are showcased heavily, and every track is danceable.

The lyrics are nothing overly intellectual, what they are is real. Matt Sims sings from the heart, everything is about life. His life is that of a Wisconsinite, as is the rest of the band's. And they're proud of it.