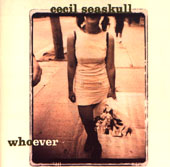 Any Time, Any Place, Anyone.
by: mark feldman

Let's play free association: Edie Brickell, Julianna Hatfield, Lisa Loeb, Cecil Seaskull. We've certainly heard this before - a female singer / guitarist who deliberately sings like a 12-year-old (if that really is your voice, Cecil, I apologize, it's just hard to believe that any grown woman really sounds like that) and writes songs that are too folk to be alternative and too alternative to be folk. Like the others, Ms. Seaskull has the benefit of an all-star cast playing with her, in this case including Rufus Wainwright, Hole's Melissa Auf Der Maur, and seminal alt-rock session drummer Jeff Stone. In all likelihood she is a friend of one or more of these people, they invited her up to their recording studio sometime last year, maybe even let her touch their expensive equipment, and gave her the lucky break we all wish we had.

But all that having been said, Cecil Seaskull does have a few interesting ideas worth recording. "True Love" reeks early '90s Seattle with its childish paeans to a punk rocker, dissonant guitars, and soft-verse-loud-chorus structure, but as a wholly unoriginal pop song it's not bad. It can actually be argued that it breaks new ground by using this music with lyrics that are downright happy - the loud refrain over dissonant guitars is a repeated chant of "I love him!" The next few tracks are comparatively uninteresting, probably because we're still recovering from the utter shock that anything like "True Love" could be recorded in 1998, but they do grow on you. "2E" makes very little sense, but the ersatz trumpet is a nice touch. "La Song" sounds less dated, adding some spacey electronica to the mix. And "Toutes ces Filles" is in French. But the most original music here is the triple-shot of acoustic songs, "Cheap," "The Bruise" and "Dim." The last of these includes some scary atmospheric drumming too. "Ridiculous" is musically (and lyrically) the most groundbreaking; an introspective alternative torch song, equal parts Missing Persons and PJ Harvey.

On the downside, Cecil Seaskull often writes like a 12-year-old too. Lines like "You look so different / you're not the same," "I know we've been here before / some time in the past" and "He's so awesome," when sung with no irony whatsoever, should never be let onto a professionally released compact disc. And the cat-like screeches of "I LOVE YOU!" at the end of "Sweet Girl" (alas, this is what closes the disc) are downright ridiculous when set to Nirvana-esque music. This, we may recall, happened in "True Love" too. It could be alternative Spinal Tap.

But in spite of the vast unevenness that prevents us from taking Cecil Seaskull very seriously, it can still be said that there's hope. For one thing, she tries. Will her next effort explore the new territory she hints at, or will it pine away for the heyday of grunge without really understanding what it was all about? Time will tell.