Sketches for My Sweetheart the Drunk Album reviews.

Home » Sketches for My Sweetheart the Drunk

Sketches for My Sweetheart the Drunk 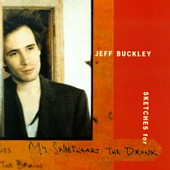 In the wake of his accidental death by drowning at the age of 30 on May 29, 1997, it is all-but-impossible to hear Jeff Buckley's Sketches For My Sweetheart The Drunk with objective ears. Factor in the equally-untimely demise of Buckley's father -- the uncompromising jazz-folk fusionist Tim Buckley -- of a heroin overdose at age 28, and the Musical Fates suddenly seem not so much innocently hit-or-miss as coldly calculating and actively vindictive.

There is a danger, of course, in blindly mythologizing those who die before their time, for it is through even the most minor shiftings of history -- the lives and legacies of our predecessors eyed through a comforting gauze of ignorance and nostalgia -- that devils are deified, holocausts are absolved, and the wholly mediocre are granted access to immortality.

Indeed, would James Dean be "James Dean" if he had lived to take on a Brando bloat? Would JFK still reign in our collective memory as King of Camelot? Would Janis, Jim, and Jimi still be bewitching us in this paranoid era of impeachment and conspiracy, or would their once-fiery lives long-since been damped to ash -- reduced to so much fizzled fodder for "Can This Career Be Saved?" magazine sidebars and VH1 "Whatever Became Of?" retrospectives?

Of course, these are things we can never know. All we can know -- and ceaselessly interpret, evaluate, and debate -- is the work they left behind.

Jeff Buckley left Sketches -- a "2-CD, 20-song collection of new studio and four-track recordings" released nearly a year to the day after his body was recovered from the Memphis, Mississippi. With lyrics freely invoking oceans, seas, rivers, and reservoirs, it is a most ominous epitaph, an unintended requiem that eerily mirrors the man's impending death, shard by slivered shard.

Here, as with his 1993 debut Grace (worth the price of admission for its haunting acoustic cover of Leonard Cohen's "Hallelujah" alone), Buckley proves himself less a master of effective songcraft than of evocative soundscapes. The strongest songs, as such, are the first disc's " Everybody Here Wants You" and "Nightmares By The Sea" -- the former scoring with its smoky, soulful groove, the latter with its driving sense of dread and spookily prescient poetry:

Conversely, Sketches' soundscapes are best represented by the pitch-black pairing of "New Year's Prayer" -- its sinister metronomical meter and multi- tracked incantations suggesting a full-moon-illumined Druid sacrificial ceremony -- and "You & I" -- sounding like nothing so much as Romeo bidding adieu to Juliet within the resounding bowels of the Capulet tomb.

Elsewhere, Buckley's expressive, falsetto-friendly tenor (Thom York-esque, with a dash of Robert Plant) swings nimbly from a whisper to a wail, from the sweetest coos and come-ons to the lustiest blood-gorged growls. Whether the songs are subtly soaring ("Morning Theft") or puckishly rutting in the muck ("Your Flesh Is So Nice") -- Buckley proves himself all-but-incapable of committing anything less than his deepest feelings to disc. But make no mistake -- not every sketch is an exercise in death and exorcism, as the sly, slurred wordplay of "Yard of Blonde Girls" gives way to the bouncing bass and lightly chiming guitars of "Witches' Rave."

The album's second disc is the decidedly "sketchier" effort here, though repeated listenings eventually yield rich rewards. The centerpiece is a sextet of four-track recordings Buckley produced himself while living in Memphis. These are far from pretty pieces, rife with fuzzy feedback and cling-clanging industrial percussion. But what they lack in studio sophistication and shellac, these four-track testaments more than make up for in intimacy, affording the listener the unique opportunity to eavesdrop on an oft-times violent game of hide-and-seek between a man and his muse. Standard rock conventions are effectively stripped away, all the better to spotlight the musician's soul, the bare bedrock upon which beauty is built.

Once the four-track tempest crests, Buckley graces us with a glimpse of spring with the spare, sparkling "Jewel Box" and the bluesy, swan-song strum of Red Foley's much-covered "Satisfied Mind." The change in weather is a welcome one, though these late-ascending suns -- even as they warm and comfort us -- also serve to illuminate that most sad and pointless of postulations: what might have been? If only history could be shifted -- Fates made less angry; rivers more forgiving -- oh, what might have been....

Come to think of it, a paunchy, balding James Dean might have been a lovely sight, indeed.