How Does Your Garden Grow? Album reviews.

Home » How Does Your Garden Grow?

How Does Your Garden Grow? 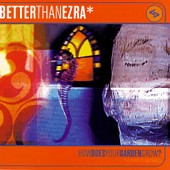 They Came From the Land of Mardi Gras
by: bill aicher

Well, gardens grow and so does Better Than Ezra with their third album, How Does Your Garden Grow?. If one looks at the progression of the band through their albums, one can also see how to keep up with a changing musical world. The band started out in a time when grunge was king, and their rock style showed through with Deluxe. Their second album Friction Baby was a step away from the grunge style into the world of what we call alternative rock (Harvey Danger, Everclear, Matchbox 20). But this new album, wow is it a change from the early Deluxe days.

The new album marks BTE's lunge into the electronic world. Anyone who has heard the X-Files soundtrack has heard "One More Murder" (track 2 on this CD) and is sure to have noticed the electronic additions. However, the band has not tried to go techno - thankfully. The electronics are merely added for effect and to make the album more cutting-edge.

However, if you fear change you are still safe. The band includes many tracks that are more reminiscent of Deluxe than they did on the last album - "At the Stars" being a prime example. The band has also included a regiment of horn, string, wind, an percussion guests. It adds a lot to the musical experience, without taking from the core band.

Overall the CD is very good. It is not my favorite by BTE, but it is close. My favorite will always be Deluxe if not for nostalgic reasons above all other. It is better than Friction Baby, but that is more than likely due to the Sophomore jinx. Their sound continues to be original - something you don't find everywhere else - the Southern charm perhaps? Anyways, if you do get a chance to check it out be sure to listen to tracks six and eight ("Under You" and "Happy Day M0M0"). Least favorite track would have to be the first one "Je ne m'en Souviens pas" - it is an instrumental basically, very tribal beat with processed voices. I personally think it is too long, and sounds a bit too much like PM Dawn.

If you are a fan of Better Than Ezra's earlier work, especially Deluxe and are unafraid of the steps towards the electronic age, this is a great album for you. Likewise, if you are simply looking for a band with great musical talent you can never go wrong with Better Than Ezra. This band from New Orleans records in their own studio, so they do exactly what they want. (Deluxe was already recorded before Elektra got ahold of it, so you know this is a band with their hearts and souls fully involved).