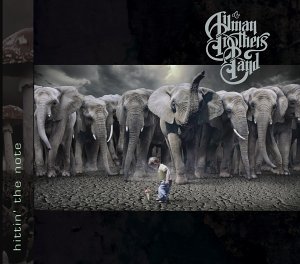 Give the People Exactly What They Want
by: matt cibula

If you're a fan of the Allman Brothers Band, you already have this album, and you love it more than you love your grandchildren and your hiking boots. Plus, you're probably an Allmanomaniac, so you're going to be pissed off that we haven't given this a 7 out of 5 and said "this album is so good that you will literally barf all over yourself and then not clean it up for days" or something like that.

Well, if you are that guy, then my apologies, etc. But I'm not talking to you: I'm talking to people who don't necessarily own Eat a Peach on plutonium vinyl and have a tattoo of St. Duane taking up their entire back. For people like that, let's put this into context: the Allmans were great precisely because they took blues and rock and country and put them together, and then added a twist: the jazz of John Coltrane. No, I'm not kidding—the major influence on Duane and Gregg and Warren Haynes were the mid-period Coltrane solos that went on forever in a modal mode. In their prime, every member of this band could solo for like a half an hour and only lose half the audience to the bathrooms or the pot dealers in the lobby.

They've taken some time off, but are now back together, with Haynes (late of Gov't Mule) back in the fold, sharing lead guitar duties with star-in-his-own-right Derek Trucks, whose uncle Butch is one of the drummers in the group (Jaimoe Johanny Johansen still holding down the other kit); Gregg has recovered enough from his marriage to Cher to sing and play keyboards again—it's like the last 30 years never happened!

And this record is pure vintage Allmans: long-ass blues-rock jams with those incredible Coltrane solos! funky double-drum jams (Oteil Burbridge on bass adds A LOT to this band, and Marc Quińones' congas don't hurt one damned bit)! Yeah, they sound a little clearer now thanks to modern technology, and Derek brings some additional spunk and sting to the group. The guitar work here is simply stunning, even better than it has a right to be; the soloing on "Rockin' Horse" alone will probably make you just die. This here is 75 minutes' worth of brand-new vintage old-school/new-school ABB.

Which you might or might not like. "Desdemona" is a long slow one that turns into a great boogie jam. "The High Cost of Low Living" is kind of a boring country song that turns into a great boogie jam. They cover the Stones' "Heart of Stone" so they can turn it into a pretty good boogie jam. "Instrumental Illness" eschews lyrics altogether in favor of a 12-minute be-bop-jazz-odyssey boogie jam. Et freakin' cetera. You want to hear great band interplay the way it used to be? You stop here and listen awhile, and you'll understand.

So what's wrong with that? Well, nothing, unless you want your music to take chances or bring something new to the table. There's nothing here indicating that these guys really care if you can't tell the difference between "Who to Believe" or "Firing Line"—it's all just pretext, because they're probably gonna stretch each of these out to 20 minutes or so live anyway.

Hey, I like this CD, but if you want things to be a little more hip or cool, you're gonna hate this. So be warned, all you techno/housey/power-poppers and punk/funk/prog/hoppers—stay the hell away from Hittin' the Note. But if you like a bit of the good old rock and roll, this is a nice safe comfy disc that happens to contain some of the damnedest hottest best guitar solos you'll hear this year or any year.
08-Jun-2003 4:55 PM