Write It In Stone Album reviews.

Home » Write It In Stone

Write It In Stone 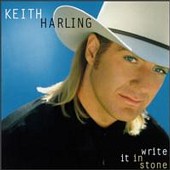 No Annoying Trends
by: jane kirk

I don't like most new country singers who wear hats. Most of them have no distinguishable quality to set them apart from the legions of hat acts who came before. Which is to say they borrow the clothing (hat) from George Strait, and the biography from Garth Brooks (listening to James Taylor records while dreaming of becoming a country star.) However, simply wearing a hat does not automatically render one incapable of making good music. Such is the case with newcomer Keith Harling.

Keith was born in South Carolina, and calls Chattanooga, Tennessee home. These are fairly obvious facts as his deep baritone wraps around words such as "hall" and "on." Which only rhyme once they are subjected to Keith's delicious voice. Okay, I forgot to mention, he's 6'5" with the hat and boots, has blond hair and blue eyes. In other words, he is the perfect man, and when he sings "I could go home early for a little fun," any red-blooded female will wish that he was coming home to her, but I assure you that Mr. Harling's gymnast physique in no way interferes with my assessment of his musical talents.

The album starts out with "Papa Bear," which is also the first single. The narrator in the song has a perfect story book life, but that all ends when he goes home to find his wife in bed with another man. While that is rather depressing (as it is supposed to be-this is a COUNTRY album), it is in no way as sad as "I Never Go Around Mirrors," in which the singer laments his lost love by "never combing his hair or shaving his face." The person in the song has become so pathetic that he even despises himself. Keith instantly makes the song his so that it is impossible to imagine anyone else singing it, even though it been previously recorded by country legend Lefty Frizzell and the late Keith Whitley. The entire album is not this depressing. "I Love What I See" is a light look at falling in love. "Right in The Middle" is a bouncing uptempo number celebrating being happily in love. "There Goes the Neighborhood" is a light-hearted complaint from a bum's point of view when Prince Charming moves next door. There are a variety of emotions on the album, and every song on it is wonderful. There isn't a dog track among the ten. It is what you might call a must-have.

With the exception of the hat, Keith doesn't follow any of the current annoying trends that country music has become fond of lately. He's not in high school (at thirty-five he is old enough to be LeAnn Rimes' father.) His albums will most likely never cross over into the pop charts. He doesn't show his belly-button. He doesn't wear spandex. For all of those reasons, I am concerned that Keith Harling will be find himself without a recording contract in the distant future. However, if good music still means anything to anyone, Keith Harling will continue to make many more albums. In the meantime, we'll just have to be content the wonderful music present on Write It In Stone.