No Place That Far Album reviews.

Home » No Place That Far

No Place That Far 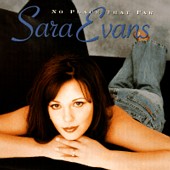 A Place Close to Home
by: jane kirk

Sara's last album, Three Chords and the Truth, was arguably the best album released in 1997. Unfortunately, radio played very few of its singles, and as a result, the album sold poorly. If her new album's title track is any indication, this time around is a lot different. The song "No Place that Far," in which Sara proclaims her neverending love for a man she's willing to follow anywhere, hit #1 on the country charts.

The song "No Place That Far" is a good indicator of No place that Far, the album. Sara's new album is has a tad bit more of a pop sound than her previous, though it is barely noticeable when the songs are sung with Sara's heavy Kentucky twang.

Among the highlights is one of the most heavily pop-inspired tunes,"Fool, I'm a Woman," Sara is joined by Martina McBride as she tells her no-good significant other that he'd better be careful because if a woman isn't happy; it's "her prerogative to change like the weather." Another of the keepers is the bouncy "Love, Don't be a Stranger," in which Sara puts a different twist on the country staple of a person lamenting not having a lover. Not that all of the songs are depressing. In "The Great Unknown," Sara encourages her man to throw caution to the wind and run away with her. It's jubilance is a stark contrast to the seriousness found in the other songs, and is a nice change of pace.

The only song that comes close to a dud on this disc is "These Days," which does little more than showcase some great harmony work. Other than that, it's just another forgetable sad country song.

Overall, Sara's album is a great investment, one which I recommend very highly, and much more so than any I've bought recently