Pieces in a Modern Style 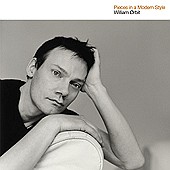 Classical for a New Era
by: peter naldrett

As a piece of classical music, Barber's "Adagio For Strings" is about as evocative and emotional as they come, producing tears from many a listener and used with startling success in The Elephant Man. So it's not really a surprise that the latest guru of the music world, William Orbit, chose to highlight it as the flagship of his new project, Pieces In A Modern Style.

Orbit, shooting to fame after producing Madonna's Ray Of Light album and making the ageing mother famous again, has also worked successfully with Prince, Blur and Mel C. But his work as a producer and re-mixer has given way for a little self-indulgence in the shape of an entire album where he tries to drag classical pieces into the 21st Century and make them trendy again.

The best of the 11-track Pieces In A Modern Style is, in fact, Adagio For Strings, largely because it isn't really in a modern style and is so true to the original that you wonder whether it was all worth the effort. But later adaptations, of works by Satie, Vivaldi, Handel and Ravel, are more imaginative, more electronic and creative, sort of Jean Michel Jarre meets Mozart.

Another highlight is John Cage's "In A Landscape," which seems bland until haunting guitars arrive and make it a masterpiece. This is no "Hooked On Classics," no fake drum beats and cruel links to scar Orbit's pride and joy here. This is a soothing pet project that succeeds entirely in what it set out to do - creating a CD of peaceful moods that makes composers contemporary once more.