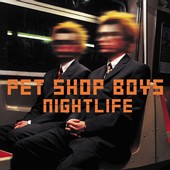 It's the Pet Shop Boys, Really
by: michael r. smith

Okay, maybe 1999 really wasn't such a bad year for pop music after all. After one listen to Pet Shop Boys new release Nightlife (love those one-word titles), I decided right away that this wasn't only their best album yet, but was also the best album this year by far. Neil and Chris have certainly outdone themselves this time. All I kept thinking was, "I'm not worthy...I'm not worthy" as I proceeded to be blown away by each and every track on this CD.

I was actually fortunate enough to find an advance copy of the limited edition double-CD version of Nightlife, and suffice to say it was well worth the $20 pricetag. Even the b-sides are amazing! In terms of the most underrated bands, you can forget Duran Duran...because we all know they've had their day. Pet Shop Boys, on the other hand, have never been given their due at any point in their 15 year career, folks. And why? Well, simply put, because of the gay label often associated with them. I hope this sad fact changes very soon. Oh well, at least the Brits have taste.

Which is unfortunate because there is so much depth to this duo for everyone in this country to appreciate and yes, perhaps even learn a new way of looking at life. One only needs to get past the Boys' aloof image to look a little deeper at how universal the messages are in their songs. The ironic lyrics themselves are always full of wit and brilliant perception. The melodies are complex, yet engaging and emotional...which in itself is ironic, since these two are masters of seeming enigmatic and distant.

For those who remember how weighty the subject matter and feel of their most critically acclaimed album to date, 1990's Behavior was, Nightlife will be seen as a welcome change. The two albums, appropriately enough, could actually be bookends for the decade of the 90's itself. As tumultuous and varied as the music scene has become, it is rather nice to see PSB rise above it all and continue to grow the way they themselves see fit. The term "sellout" which could be given to any number of wannabe artists, will never be attached to these consistently challenging musicians.

With hi-energy dance tracks like the opener (my favorite track) "For Your Own Good" and "Radiophonic", as well as the radio-friendly "New York City Boy" and the lead-off single, "I Don't Know What You Want", this is album even tops their previous Bilingual effort, which is a feat in itself in my opinion. Like U2 and Depeche Mode, the Pet Shop Boys is one act that gets better and better with each subsequent release. And how they ever pulled off the understatement of "You Only Tell Me You Love Me When You're Drunk" with an over-the-top title like that I will never know! If there's a poll for best song title of all time, this one is sure to win.

Speaking of polls, the Pet Shop Boys have conducted their own on www.petshopboys.co.uk to see what kind of consensus there is regarding individual tracks on Nightlife. Currently neck and neck for the favorite spot are "In Denial", a moving (and gay-themed...shocker) duet with Kylie Minogue, and "...Drunk", of course! I agree with the last placements of "Vampires" and "Happiness is an Option", as these sound too dated. Maybe Prince isn't the only one with a vault of unreleased material, hmmm?