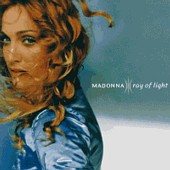 Zephyr In The Sky
by: kriste matrisch

Shortly after the release of Madonna’s self-titled album in 1982, she was asked what her for the future was, she replied, "To conquer the world!" She obviously has been able to do that for 16 years. Through her experience as a lyricist and singer, she has been a successful businesswoman, as well. With every album that she has done, there has always been controversy surrounding her. Her second album, Like A Virgin, started it all with her proclamation as being a Boy Toy and a Material Girl. She was immediately viewed as a sex object then, and it remains today because she continues to use that business tactic, knowing that sexuality does sell. However, the controversy surrounding this album doesn’t deal with sex; it deals with the style of music that she used around her lyrics: techno/electronica. When I first heard this album, I thought that every song sounded the same. I told this to my friend, and she replied, "Yeah, but I bought the album out of respect." I thought about that, realizing I felt the same way. I bought the album shortly after my first listening.

I played the album over and over until I could find what made me love it, what made it Madonna. Not only is it as my friend says, you have to "respect" her for always trying something new, but it was her visual lyrics that got to me. I have heard people say that her writing has changed because she is a mother now, but I don’t think that’s entirely true. People change in time, thus maturing. She is still singing about sexuality as before, but this time, it is a bit more subtle. For example, in "Candy Perfume Girl," I think it is a celebration of oral sex, "Young velvet porcelain boy/ Devour me when you’re with me."

The song, "Skin," has to be my favorite on the album. I mean, you don’t know how many times I have thought these next lines when I’m dealing with a new love: "Do I know you from somewhere/ Why do you leave me wanting more/ Why do all the things I say/ Sound like the stupid things I said before/.../ Put your hand on my skin." Madonna has become more delicate with the language, making me respect her even more.

I think this album is the best written lyrically; it’s very colorful and brilliant, like a "Ray of Light."