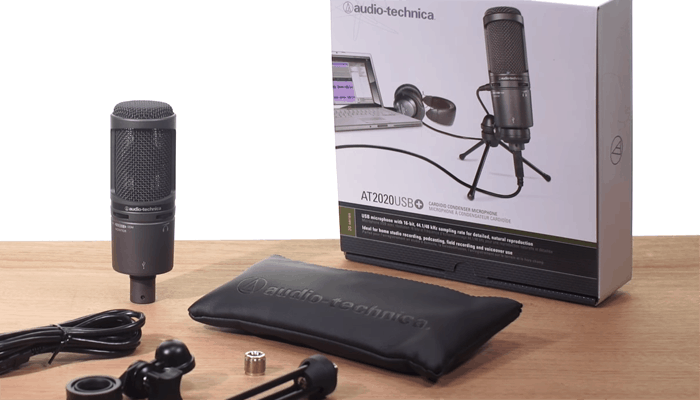 Audio Technica has a long history of making affordable microphones that suit the average Joe's budget, but none more notable than the AT2020. With a plug and play style standalone mics on the rise, it's hardly surprising that they were quick to release the USB version of their most popular mic.

When the original made its appearance, some people were underwhelmed. As it was one of the first on the scene, the products which followed outdid it. So came the AT2020 USB+, distinguished by the addition of a headphone input first and foremost, which was an oversight that was sorely needed.

The USB+ is suited to spoken voice applications. Being an independent microphone with headphone monitoring makes it a user-friendly option. It is very quick and easy to use. You can plug it in and get going without any fuss. This makes it ideal for a range of uses, whether that's podcasting, interviews, voice-overs, or video narration.

That said, solo acoustic musicians might find that a USB microphone is a cheap way to get a passing musical idea recorded before you hit the studio.

The USB+ is a side-address studio condenser mic. It has a cardioid pick-up pattern. These design features make it very good at isolating the input you want to record. It also helps to reject the background noise. This is because the polarity only picks up from the sides and rear.

It's surprisingly well-made for a low budget microphone. The grille is pretty strong. It resembles the model it is inspired by.

Internally it features a custom-engineered, low-mass diaphragm just like the original AT2020. It measures 16mm, making it a medium diaphragm rather than a large, but it has good sensitivity. This gives it an accurate, dynamic frequency response and improves the transient response as well.

It has a fixed-charge backplate that keeps it polarized all the time. Side-by-side with the non-USB AT2020, there's no discernible difference between the audio capture of the two.

It has a signal to noise ratio of 74-decibels. This means it has low self-noise and provides a decent output level better for clear communication.

The frequency response is 20Hz-20kHz, which is pretty standard, but it's well attenuated, and there are no real peaks. The low end is flattened to make sure there are no rumbles. It also helps to ignore any handling or stand related noise.

The AT2020 USB+ is completely bus-powered, working on low-voltage phantom powering. There is a small blue LED indicator that lets you know when it's ready to rock. The digital output has a good analog to digital conversion, with a 16bit depth rate over a sample rate of 48kHz, giving it a dynamic range of 90-decibels.

It's widely compatible, working with Mac, PC, and even iOS operating systems. It's also automatically recognized within most recording software.

The built-in headphone jack sports its own volume and mixing controls. So you can control the levels of the mic signal and playback level and listen to sound at safe levels.

It comes with a small tripod desktop stand, which can pivot to make positioning easy. It's lightweight and portable and also has a storage pouch to keep it in when it is not in regular use.

The At2020 USB+ is an updated model of the company's already pretty commendable, low-cost USB microphone. The direct headphone monitoring makes it a viable recording option for those without an audio interface. It has a mix as well as a volume dial, which means you can tailor the mic levels and playback separately. The low latency means you won't find any delay issues.

This product is well-designed with durable materials. It has an accurate frequency response that doesn't color your sound. It presents a convenient recording method, perfect for capturing ideas before they disappear. It's also good for tight budgets.

The AT2020 is a no-nonsense option for podcasting and narration. It's based on an acclaimed microphone model. With expert engineering, it provides a great quality recording with good details.

- This is not the cheapest affordable USB mic on the market, but it's definitely recommendable.

The AT2020 USB+ is an affordable USB mic that functions at a professional level. There are some USB mics around for half the price, but you get what you pay for, and those are better suited to Skype or TeamSpeak.

This one benefits from some great engineering. The capsule is developed to give it a better digital conversion for a professional resolution. This means it's a viable recording option for many different ventures.

What is a Condenser Microphone?